Bitforex — One of The Biggest Wash Trading Exchanges in the World

When it comes to cryptocurrency exchanges there are some well-established names in the industry. The likes of Binance, Kraken and Bitfinex are known throughout the crypto industry and favored by crypto enthusiasts and traders. During the ICO rush of late 2017 into early 2018, these are the exchanges which token holders demanded ICO projects get listed on in order to boost liquidity and coin price. However, this is easier said than done as many exchanges charged thousands of dollars for a coin to be listed.

Given the high costs associated with listing on exchanges then an ICO project must determine if an exchange is worth it by looking at the trading volume on the exchange among other things. Along with a rise in the number of ICOs, 2018 also saw a rise in the number of cryptocurrency exchanges. With many already established exchanges out there, many of these new exchanges began to utilize what is known as “wash trading” in order to artificially boost their volume. Wash trading is the practice of using a bot to buy and sell assets on an exchange in order to inflate the volume. Wash trading creates a false sense of demand which makes it seem as though the exchange is very popular and worthwhile. Through this practice, some exchanges are able to lure ICO projects and customers by misleading the market. One of the greatest perpetrators of this is Bitforex, an exchange which proclaims themselves as the “world’s leading digital asset trading platform” but in reality fakes around 93% of their volume. Their daily trading volume on January 29th at 9pm UTC was $242,127,027 meaning that only about $16,948,891 of that is real!

In a recent report by the Blockchain Transparency Institute (BTI) published in December, it was found that quite a few of the exchanges listed in the CMC Top 25 had fake volume. Not surprisingly, Bitforex was one of these exchanges with only 7% of their reported volume being deemed authentic. The rest of the volume is fake volume created through wash trading. 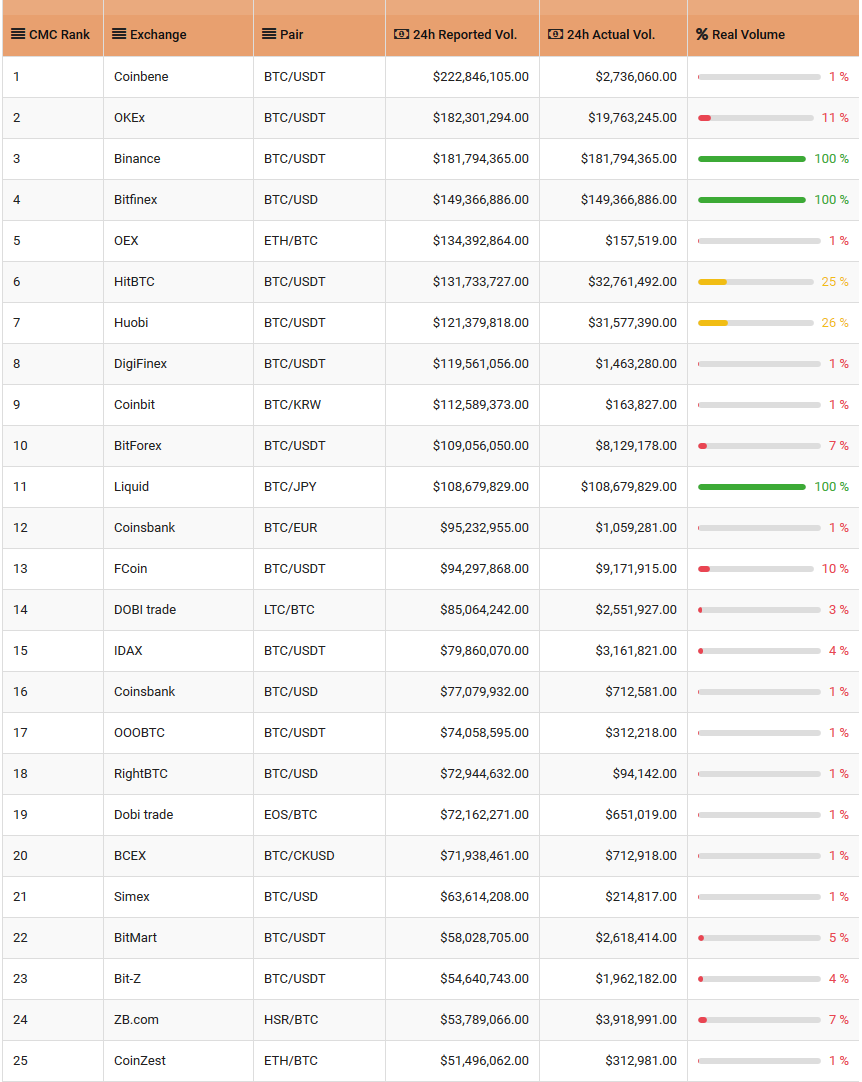 HOW DOES BITFOREX BENEFIT & CREATE DAMAGE IN THE CRYPTO ECOSYSTEM

1) Bitforex tricks projects into listing on their exchange and charges them a 10 BTC listing fee. They do this by providing false trading volume and a fake legal entity. Unsuspecting crypto projects believe they are listing on a top reputable exchange which will please their token holders, but instead, they are simply giving away precious funds.

2) Bitforex uses this high fake trading volume to lure unsuspecting customers by making them believe that they are a top exchange. However with their fake volume that isn’t the case. Bitforex then makes money on these additional customers with the fees they charge for activity on the exchange. This isn’t the first article to expose the practices of the Bitforex exchange as others can be found here, here, here and here.

The most trusted source for verifying the price of a token or the volume on an exchange is CoinMarketCap.com (CMC). CMC Data for exchanges is shown as reported volume and adjusted volume. Adjusted volume is meant to reduce the instances of fake volume being reported, but if the report from BTI is any indication, CMC has not been very effective in stamping out fake volume.

Comparing Bitforex to more well-regarded exchanges such as Bitfinex we can see that Bitforex appears to have roughly twice the daily trading volume of Bitfinex. 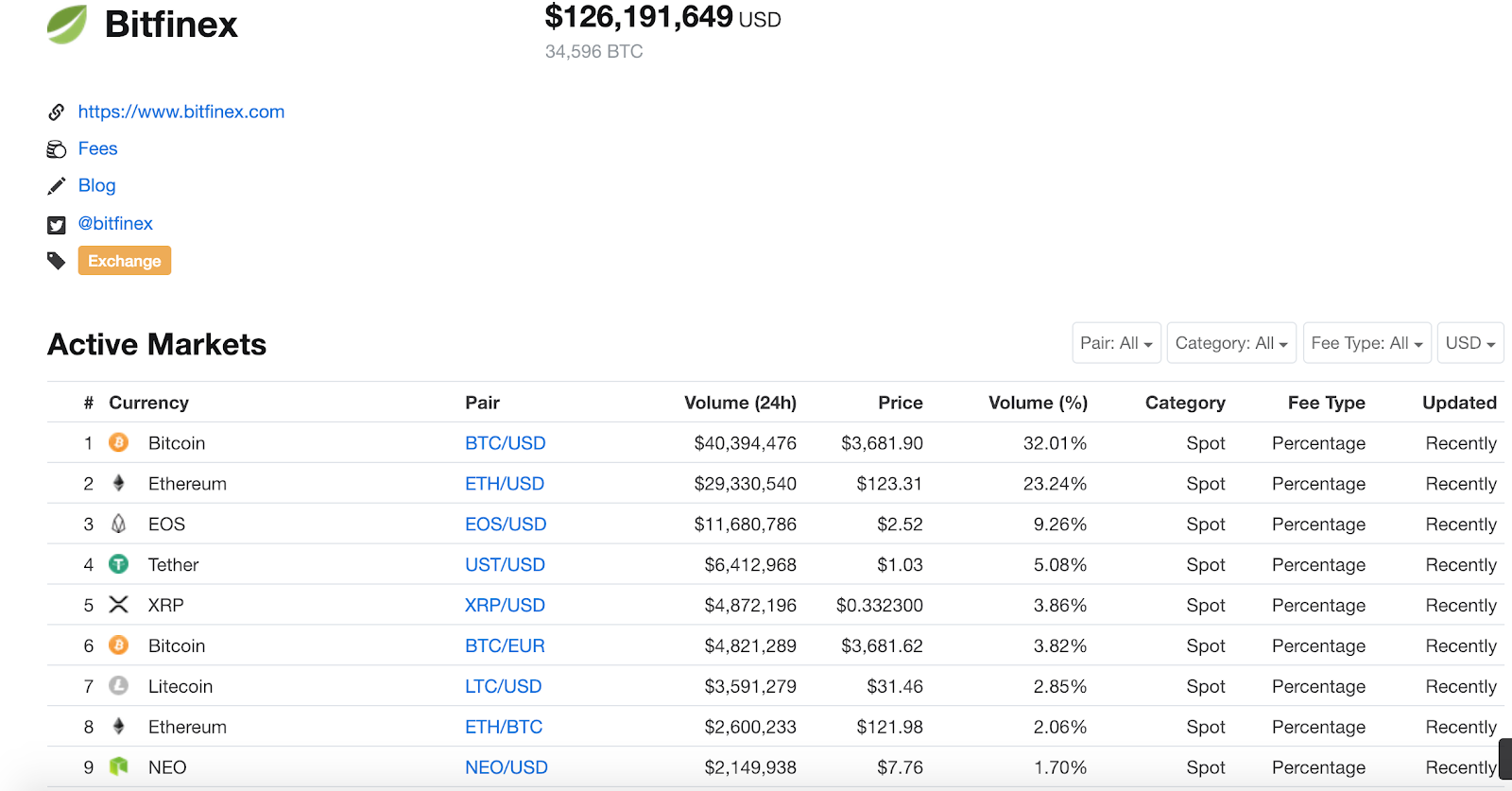 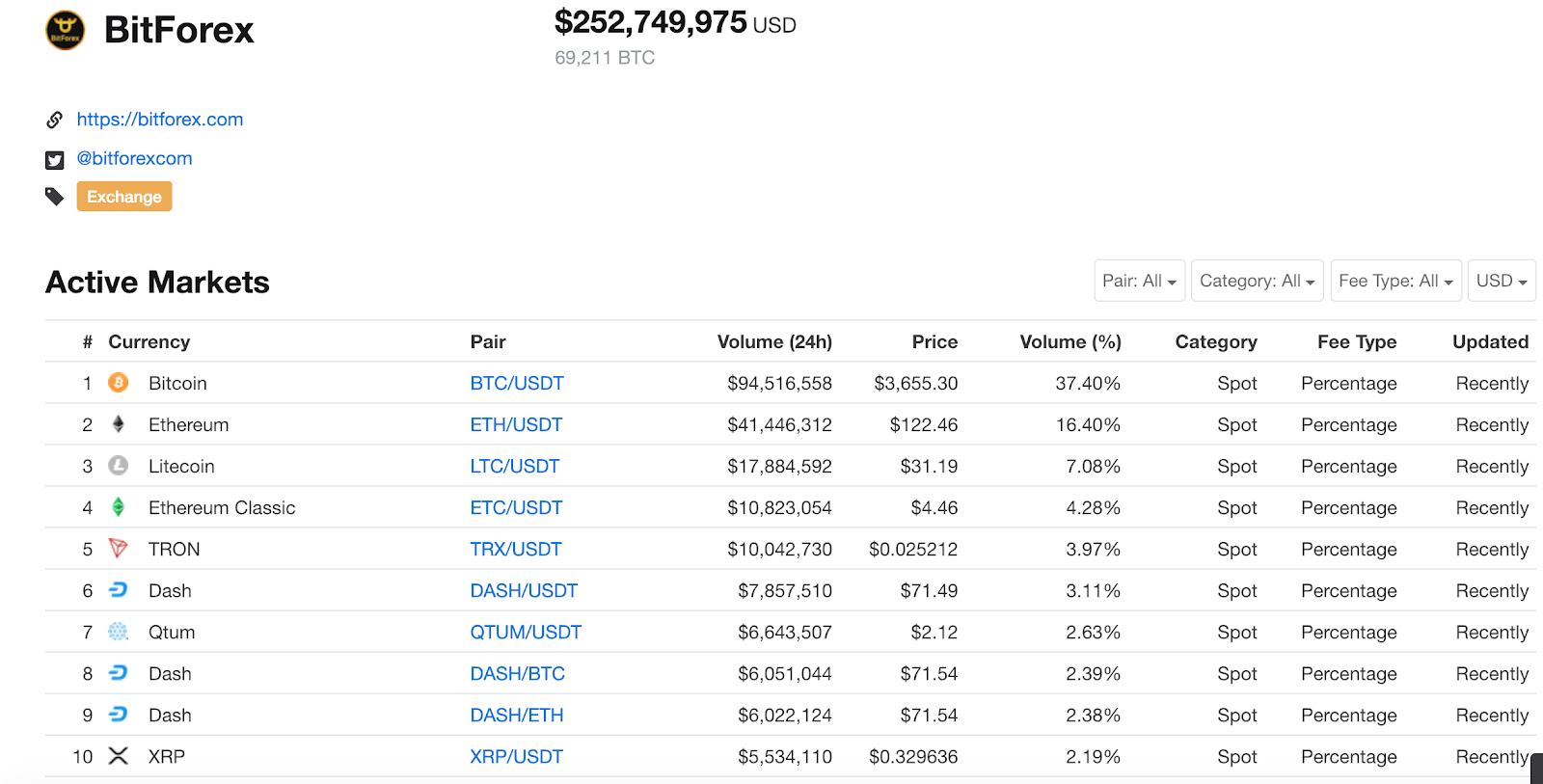 When comparing Bitforex to Bitfinex in terms of traffic data, there is a huge difference in the number of monthly visitors to the site. In December 2018, Bitfinex received around 5.79M visitors, whereas Bitforex received only 491.24k visitors. The differences between the number of visitors would lead one to believe that Bitfinex would have a much higher trade volume, but according to the data from CMC, this is not the case.

Finally, we can see the fake trading Bitforex utilizes in action here.

Bitforex has been performing wash trades and here are some of the token pairs where these bot trades can be detected.

This section denotes the fake volume trades being run by the Bitforex bot.

Note: For the videos and respective tokens shown in this video, they all have one thing in common — fake trades generated by the Bitforex bot. Trades are sometimes randomized but most times the trade is initiated at the same volume or price. Also, these trades occur at random times to ensure that 24-hour volume is maintained.

The first video and screenshot in this section show what to look out for in the other videos, namely: a high 24hr generated volume at the top, and a series of fake trades initiated by the bot in the far right columns.

Faking cryptocurrency exchange volume and committing fraud is a serious offence which financial institutions around the world are beginning to take note of. Recently, two leaders of the South Korean exchange Komid were sent to jail for their part in faking exchange volumes. The guys involved in the Bitforex exchange volume faking include: Jason Luo and Garrett Jin.

The legal entity provided by Bitforex to projects which want to list with them is not known by the financial authorities in the Seychelles or Singapore (where Bitforex is said to have offices). In fact, after a visit to their supposed office in Singapore, no one there had even heard of Bitforex. A follow up to locate another address via their Telegram support group proved unsuccessful as moderators refused to answer. 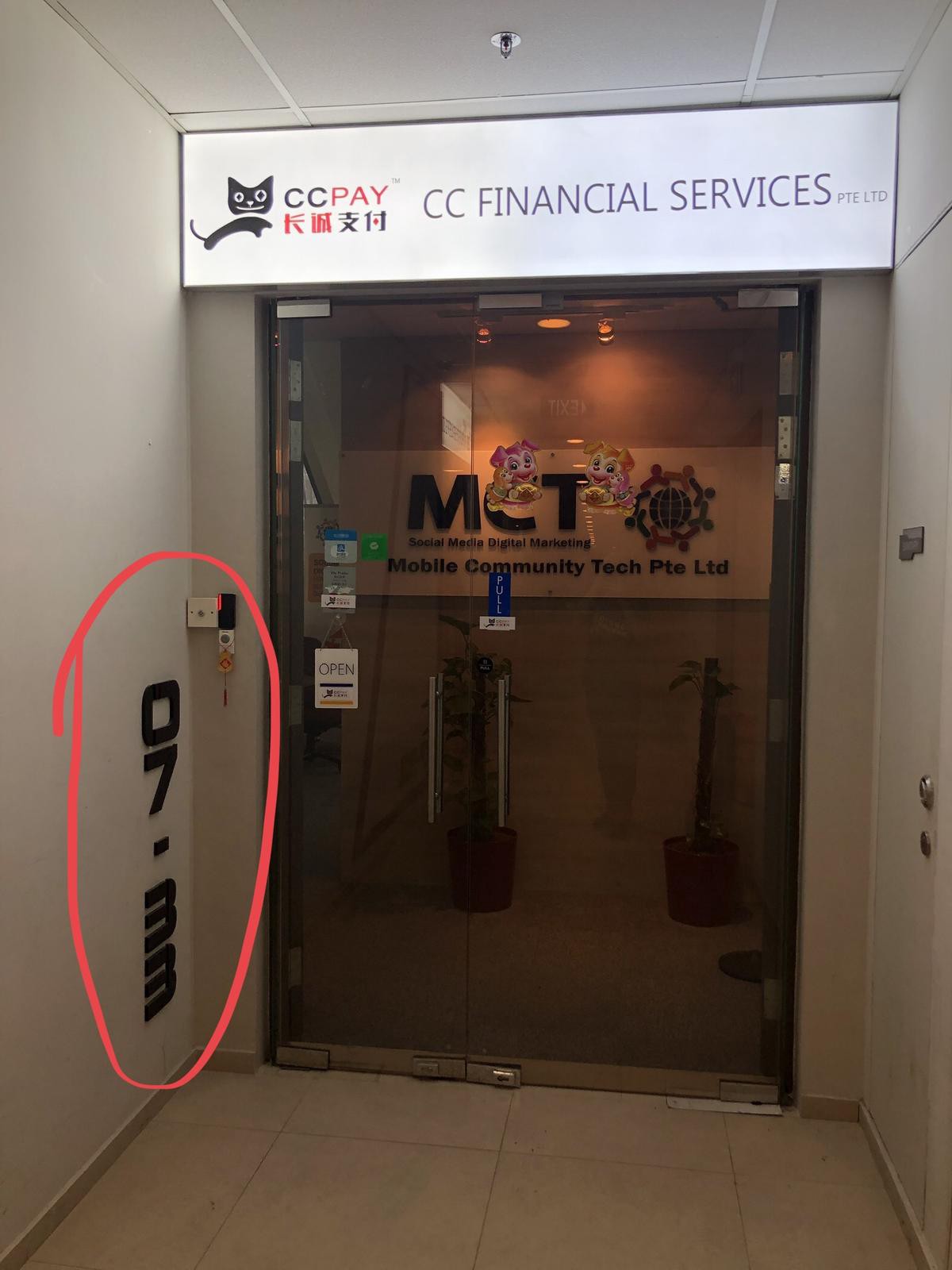 In fact, the team behind Bitforex has even admitted to using bots on their website. We were able to get some screenshots from a project affected by BitForex’s actions where they show this. Their claim is that this bot is used to make a better user experience. https://ibb.co/LkhXzMchttps://ibb.co/DzbZkgf https://ibb.co/ZXPPqzF

In recent months we have seen an increase in the number of reports highlighting the practice of wash trading on various cryptocurrency exchanges. One report in particular from...

Wash trading, one of the most damaging practices in the cryptocurrency industry has been very difficult to deal with since cryptocurrency exchanges began popping up. Exchanges which engage in...